When I first started this blog I planned on talking about how I come up with my stories and the characters in them.  Unfortunately I haven’t had much time to devote here but since I know a lot of people love Emily, I wanted to give a little insight to her, Ryan and definitely Jacques.

First a little business–Choosing Him is the third and final piece to Emily’s story.  At least as far as I know, I never really know when characters will push for me to write more or sometimes less about them.  Within the Choosing Him download (available at Amazon, Barnes & Noble, and Kobo) is Wanting Him and Having Him, the first two parts of the story.  These three stories are available together for the price of one story so if you haven’t picked up any of them yet, here’s your chance at all three.

SPOILERS AHEAD! Do not proceed if you don’t want to know what happens in the stories.

When I first wrote Wanting Him, I’ll be honest, I planned on that being just the one story and that was it.  But just like I mentioned before, some characters want more time to tell their story.  In Wanting Him we meet Emily who is curvy and confident.  She spots Ryan, the handsome ex-Marine turn hair stylist and simply wants him.  I think we’ve all been there.  We see someone who just connects to the primal part of us and simply lust for that person physically. I know that’s how I feel every time I see Johnny Depp!

Emily, to me, is every woman.  I think that most women, whether they’re thin or plus sized like Emily, eventually reach a place in their life where they accept their body.  They might not like their body, but they know well enough how to make themselves look good to catch someone else’s eye.

Emily has her faults and insecurities but she’s comfortable with who she is and in Wanting Him, she’s only looking for sex.  It isn’t until Having Him that we get to know her a little better and see her questioning herself.

That brings me to Ryan.  Ryan is based on a guy I knew years ago.  I’ll call him Joe.  Joe was indeed a handsome ex-Marine turn stylist but why he turned to hair after leaving the military, I never knew.  He was the kind of guy who you could talk to about anything as long as it wasn’t too personal or serious.  For the years I knew Joe, he never had a girlfriend but he had a lot of female friends, some whom he had sexual arrangements with. I was always curious who those women were but he would only say they were “just friends” and nothing more.

Something that I always do is I create stories about people.  Everywhere I go, I’ll see someone and make up a background for them.  When I know someone who is as mysterious as Joe, I can’t help but give him a story for why he is the way he is.

So I took my fictionalized version of Joe and paired him up with Emily because I figured his being a stylist made it easy for her to get to know him. Unfortunately because of the history I created for Ryan, I couldn’t have them live happily ever after.  I didn’t find it realistic that Ryan would be healed no matter how great Emily was and so he became an ass in Having Him.

Obviously that meant I needed a good guy for Emily; a superman who would swoop in and sweep her off her feet.  Enter Jacques.  I wanted Jacques to be irresistible and yummy and the first thing I thought of was chocolate! 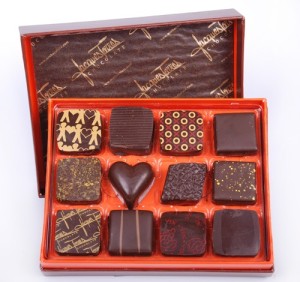 Up until a couple of years ago I was in Pastry School and one of my idols was/is Jacques Torres, the Master Pastry Chef and Mr Chocolate himself.  One night I watched an interview with him and the end of the show always asked the interviewee the same question–it’s your last day of living, what’s your last supper?  I don’t remember what Chef Torres said his meal would be, but he said he would eat it between making love to his wife.  I laughed when he said it but then I thought about how sweet that was.  I mean there he is, dying, its his last day of life and he’s not thinking about his bucket list, he’s thinking about spending as much time as possible with the love of his life. I never forgot that quote and so when I needed a great guy for Emily, I pictured Superman but named him Jacques and made him a chocolatier after Jacques Torres.

I wanted so badly to include a little sexy time between Emily and Jacques.  I even had a scene partially written where he blindfolds her while he introduces her palette to different types of chocolate and chocolate covered yummies until she becomes the chocolate covered yummy.  Unfortunately it just didn’t feel right.

Emily was hurt by Ryan and I couldn’t imagine her jumping into bed so quickly with anyone, no matter how great they were.  Plus with Jacques walking in on her crying, it just wasn’t in his character to try anything.  He wouldn’t want to risk taking advantage of her when he finally was getting the chance to spend time with her.  And so, because of all that, they only kissed.

5 thoughts on “Behind the Scenes of Choosing Him”

Liliana Rhodes is a New York Times and USA Today Bestselling Author who writes Contemporary and Paranormal Romance. Blessed with an over active imagination, she is always writing and plotting her next stories. She enjoys movies, reading, photography, and listening to music. After growing up on the east coast, Liliana now lives in California with her husband, son, two dogs who are treated better than some people, and two parrots who plan to take over the world.